Fresno Garden - Caught in the Drift 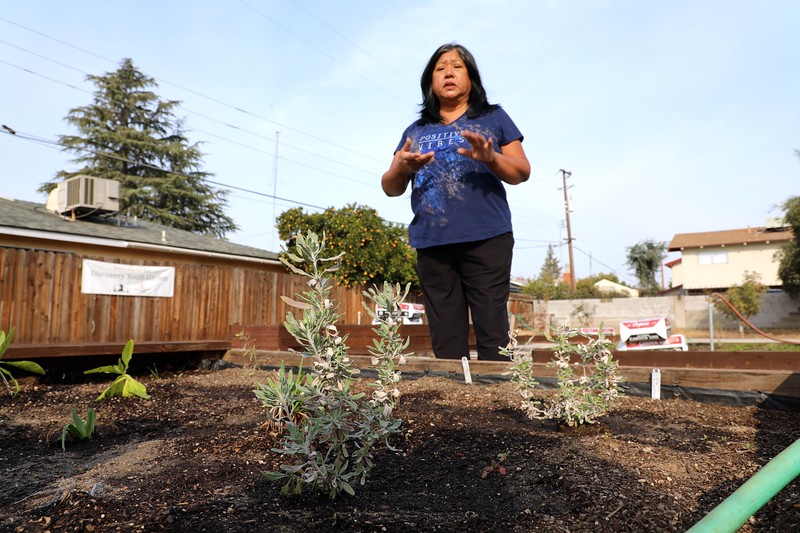 Planting, foraging and harvesting were a way of life for Darlene Franco’s family.

Her father immigrated from the Philippines to work in the rich agricultural fields of the San Joaquin Valley. Her mother was from the Wukchumni tribe and learned Native American ways from her parents and grandparents.

But after her father died of pancreatic cancer, Franco started to ask some hard questions. “I blame his death on the pesticides – everything they were exposed to and their working conditions,” she said. “That's one of the reasons why I said we need to grow our own food, without pesticides. And we want to encourage more local farmers growing for our people.”

As an adult with children of her own, Franco began her learning journey – taking gardening workshops and learning by trial-and-error. At Quaker Oaks Farm, where the Wukchumni tribe has its ceremonial grounds, farm founders Bill and Beth Lovett provided four planter boxes for Franco to experiment with her first garden.

At first, she was motivated by her own family. “I wanted to grow healthy foods for our family and make sure we were getting the best of the best,” she said.

But the more Franco learned, the more she wanted to share her knowledge. In January 2018, she became the Wukchumni Community Garden Coordinator for the Fresno American Indian Health Project (FAIHP). She now manages a small American Indian garden behind The Discovery Center administration offices on North Winery Street in Fresno.

“Everybody’s welcome to come out here and use the garden, but I watch over everything,” she explained. “People come out and help me, but we do everything together. I tell the families, ‘You’re welcome to come and pick whatever is here.’”

The garden is also a teaching space, including after-school activities, community workshops and Native American activities that reach more than 300 people each year. But Franco intends to grow more than vegetables; she wants to grow healthy lifestyles.

Nationwide, American Indians have a high incidence of heart disease and stroke, and they are twice as likely to have diabetes as Caucasians, according to the U.S. Department of Health and Human Services Office of Minority Health. In addition, an estimated 23 percent of Native American households are food insecure, which can be linked to high rates of adult and childhood obesity.

“Nearly 50 years ago, heart disease was virtually unheard of in the Indian community, but rates of the disease are now double the general population,” said Dr. Amanda Fretts, an assistant professor of epidemiology at the University of Washington. Fretts has studied the dietary habits of the American Indian population as part of the Strong Heart Study, funded by the National Heart, Lung, and Blood Institute. “Several studies have shown that unhealthy, nontraditional foods like canned meats and fast food are a large part of the problem,” she said. “Many of these processed foods contribute to diabetes, which is a risk factor for heart disease.”

Franco fights these national trends on a local level, providing seedlings and supplies so families can grow their own food at home. In less than a year, the community garden has sprouted about 25 home gardens in the Fresno area.

“This garden is changing people,” said Franco, who is studying for certification as a Master Gardener. “I think it's healthier for them. They not only have been able to eat the food, but share it and talk about it and have something to do.”

In addition to growing tomatoes, basil, peppers, eggplant and other popular vegetables, Franco has also set aside garden space to grow hard-to-find medicinals and basketry materials. For example, Franco has planted Santa Barbara sedge, which natives call “white root” because the roots are used for basket-weaving. Deer grass is used for the inside of the basket. The dried stalk of milkweed can be used for rope. There’s also native tobacco and different kinds of sages to be used in Native American ceremonies.

The medicinals and basketry materials play an important educational role in the FAIHP Clubhouse Youth Program, held after school in a classroom on the edge of the garden.

“Our youth are urban natives so they’re not directly tied to their cultural ways,” Franco explained. “So we teach them about smudging, what plants were used to maintain things. We teach songs and hand games, which traditionally were trading games.”

For Native American Heritage Month in November, the Clubhouse youth made their own moccasins for “Rock Your Mocs” week, “when native people across the country show their pride and wear their moccasins,” Franco said.

When Franco works with youth of all ages, she remembers her own upbringing.

“I grew up outside all the time,” she recalled. “I was gardening, digging in the dirt and doing that kind of stuff. Our kids don’t get that much nowadays. When they come out here, they get to play. They get the sunshine, and they get the dirt. What’s different is they get something cultural in addition, and how it ties into the garden.”