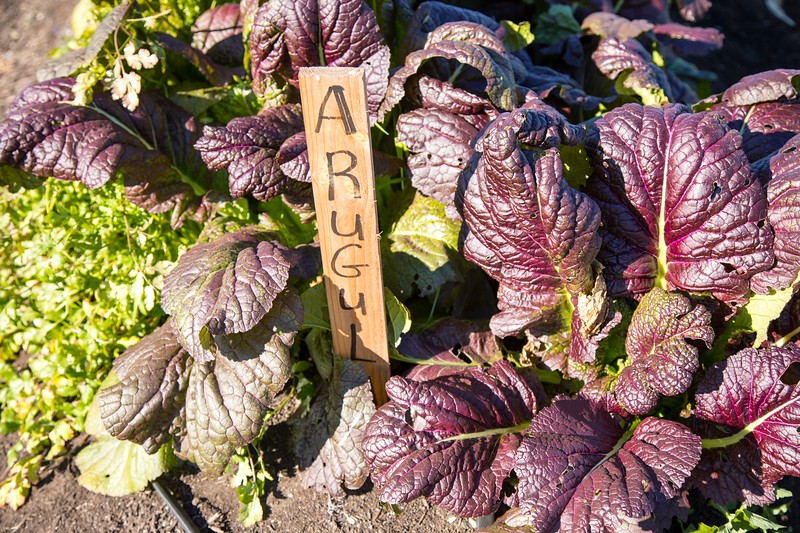 Inez Aldridge is a woman on a mission – two missions, actually.

When she co-founded the Black Urban Farmers Association in 2015, her mission was to “change the negative legacy about farming for African-Americans.” But the fruits of her labor serve another purpose – helping to expand access to healthy foods for those who live in Stockton’s food deserts.

“My background really was healthcare, but indirectly it brought me here because food plays such a part in being healthy,” said Aldridge, who previously worked in telecommunications and then managed environmental services – including cleaning and disinfecting – for a local hospital. Over time, she noticed some hospital patients “were coming in over and over” with recurring health problems.

“Specifically, African-Americans suffer greater mortality rates than other groups for diabetes, hypertension, high cholesterol and obesity,” she said. “But growing your own food with the optimum number of nutrients, having it available fresh and affordable – I discovered that could be a way to help prevent some diseases.”

Her friend Ellen Powell had been encouraging Aldridge to get one of the 20-by-20 plots at the Boggs Tract Community Farm, run by the nonprofit PUENTES. So in November 2014 – a month after she retired from the hospital – Aldridge and her husband, Almus, joined Powell at the community garden at 466 S. Ventura St. near the Port of Stockton.

That’s when their farming journey began.

Boggs Tract also had another important combination – a diversity of urban farmers, including African-American, Chinese, Japanese, Filipino, Latino, Pakistani and Peruvian families. Some were longtime farmers; others, like Aldridge, learned by taking PUENTES classes on sustainable farming practices, with a commitment to grow crops pesticide-free.

“We learn the relationship between having a good ecosystem that combines flowers, herbs, greens, even some weeds. It’s just getting that balance where you know how to have a system where everything works together,” Aldridge said. “This is an educational place where you can learn as little or as much as you want about food – growing food, preparing food, why it's good for you.”

During her first year, Aldridge connected with other African-American farmers, and in late 2015 the Black Urban Farmers Association (BUFA) was born.

At first, BUFA was farming on a quarter-acre tract at 580 Bowman Rd. in French Camp. With a $5,000 donation from a personal friend and in-kind donations from local businesses, BUFA fenced the property and built a system of raised beds for planting.

“We started a farmers market in February of 2016, and it was so successful we realized we didn't have enough space to grow enough food to have a market every week or every other week,” Aldridge said.

But when PUENTES opened more land at Boggs Tract, BUFA was able to gain about an acre for year-round production. With more land came more produce – and more opportunities to grow.

• In 2016, BUFA became the certified grower for PUENTES, supplying produce for weekly farmstands at the University of the Pacific and at St. John the Evangelist Episcopal Church in downtown Stockton.

• In October 2017, the BUFA-PUENTES connection began supplying produce for 10 schools in San Joaquin County to host their own farmers markets, part of an innovative program underwritten by Kaiser Permanente.

• In February 2018, BUFA reopened its own weekly farmers market at the Boggs Tract Community Farm.

When asked, “What sells the fastest at your market?” Aldridge didn’t hestitate: “Mustard greens and collard greens.”

Then she explained: “When BUFA started, we wanted to grow things that are culturally relevant to African-American families. We found that one of the local churches actually did a survey and they have 1,500 members, so we used their survey as part of our decision as to what we were going to grow. Collard greens was number 1. So, we grow two varieties of mustards, two varieties of collards, cabbage – those are actually the hottest items. It's different in the summer: okra, tomatoes, onions, peppers and melons, definitely. Our melons are very popular.”

Ten BUFA volunteers do it all – farming, harvesting, washing, bundling and selling produce at the weekly farmers market. Any food that doesn’t sell is donated to individuals or nonprofits that serve the community.

“In fact, one woman that we donate food to weekly recently had her food stamps cut,” Aldridge said. “She’s 64, living in a very inexpensive hotel in downtown Stockton, and her food stamps were cut to $69 a month for one person. When we see someone in need, we don't allow their inability to pay to stop us from getting food to them.”

In addition to farming at the two locations, BUFA’s active volunteers – ranging in age from 22 to 74 – work with local schools, hospitals and churches to expand access to healthy foods. And they have aggressive plans for more community outreach.

For example, two churches that want to start their own community gardens have turned to BUFA for help. To reach seniors and other individuals who might be mobility-impaired, BUFA plans to build raised beds that will enable planting at waist level. Agri-tours are planned for both French Camp and Boggs Tract, and Powell plans to offer classes on canning and preserving.

“We want to be involved,” Aldridge said. “The idea that the Central Valley can provide 65 to 75 percent of fresh produce to the country, and yet we have food deserts in Stockton – I think it's criminal. We're trying to do our part on a small scale to get the word out about food. We're an option but we're also here to help others who want to grow their own.”